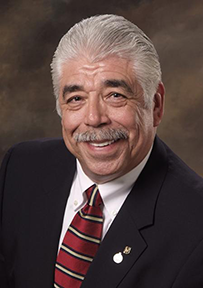 ​Treviño was first elected to the Upper San Gabriel Valley Municipal Water District Board of Directors in November 2008 and is serving his third consecutive four-year term.  He represents Upper District’s Division 2 which includes all or parts of Arcadia, Rosemead, San Gabriel, South Pasadena, South San Gabriel, and Temple City. Treviño served as Board President in 2011,  Vice-President in 2009 and 2010 and Treasurer in 2017, 2018, and 2022.

Treviño currently serves as Upper District’s alternate representative to the Association of California Water Agencies’ Joint Powers Insurance Authority, representative to the San Gabriel Valley Protective Association, and on the board of the Main San Gabriel Basin Watermaster.  He is also a member of the Los Angeles County Water Appeals Board, the vice president of the Los Angeles County Commission for Older Adults, and a former chairman of the South Pasadena Senior Commission.

He has been a strong supporter of Upper District’s development of an Integrated Resources Plan, Urban Water Management and Water Use Efficiency Plans, which have outlined the district’s blueprint for water reliability and ensure a sustainable, clean water supply.  Treviño has also strongly advocated for the expansion of Upper District’s robust recycled water system and community-based storm water capture projects across the district’s service area.

Treviño came to Upper District with an extensive water industry background.   After many years with the Metropolitan Water District of Southern California, he retired from the agency in 2014 as a principal public affairs representative within the education unit of the External Affairs Group.  Prior to that, he served as a government affairs representative for MWD.  In this capacity, he worked closely with the chairmen of both the Senate and Assembly water committees on legislation that increased the efficiency of the State Water Project to ensure delivery of an adequate and reliable supply of affordable, high-quality water for Southern California. His work earned him recognition from the Legislature for increasing awareness of crucial water issues and improving the quality of life of all Californians.

Treviño’s water sector experience includes 10 years on the Central Basin MWD Board of Directors, which he was first elected in 1994. He represented Central Basin on the Metropolitan Water District Board. At Central Basin, one of his top priorities was increasing the district’s public outreach to its diverse community leaders on water conservation and the beneficial use of recycled water. He fought to ensure that Central Basin’s budget was balanced without increasing user fees or taxes, and kept the costs of imported water at affordable rates.

Throughout his career, Treviño has upheld the importance of educating young people from all cultural and social backgrounds. This passion for education led him to pursue a teaching credential from UCLA, and a Masters in School Management and an Administrative Credential from San Diego’s Point Loma Nazarene University. He then worked for the Los Angeles Unified School District as a teacher and administrator until his retirement in 2002.

Treviño is a U.S. Army veteran who served during the Vietnam War and received an honorable discharge in 1968. Using the GI Bill, he went on to earn an Associate of Arts degree from Los Angeles Trade-Technical College and a Bachelor of Arts degree in Political Science from California State University at Los Angeles.

He currently resides in South Pasadena with his wife, Carmen.